Three of the 20 sculptures have fountains (another tradition in public statues). Three different approaches and three new technical challenges. 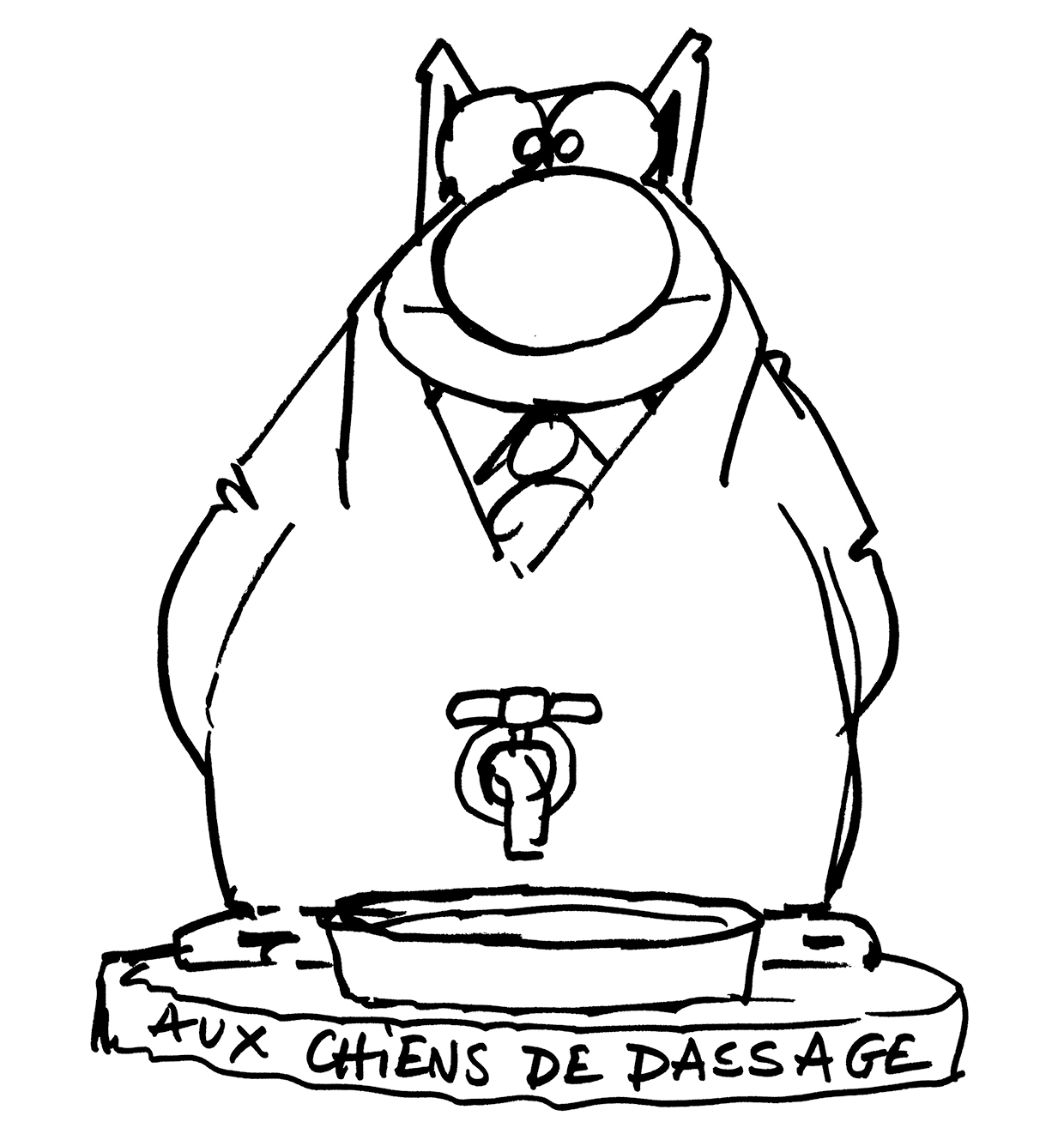 A professional fountain engineer created each installation, hiding in the base a hi-tech pump, several filters and a water disinfection system – because it has to remain clean and pure, even though we are legally obliged to put a sign on each base that the water is not drinkable. 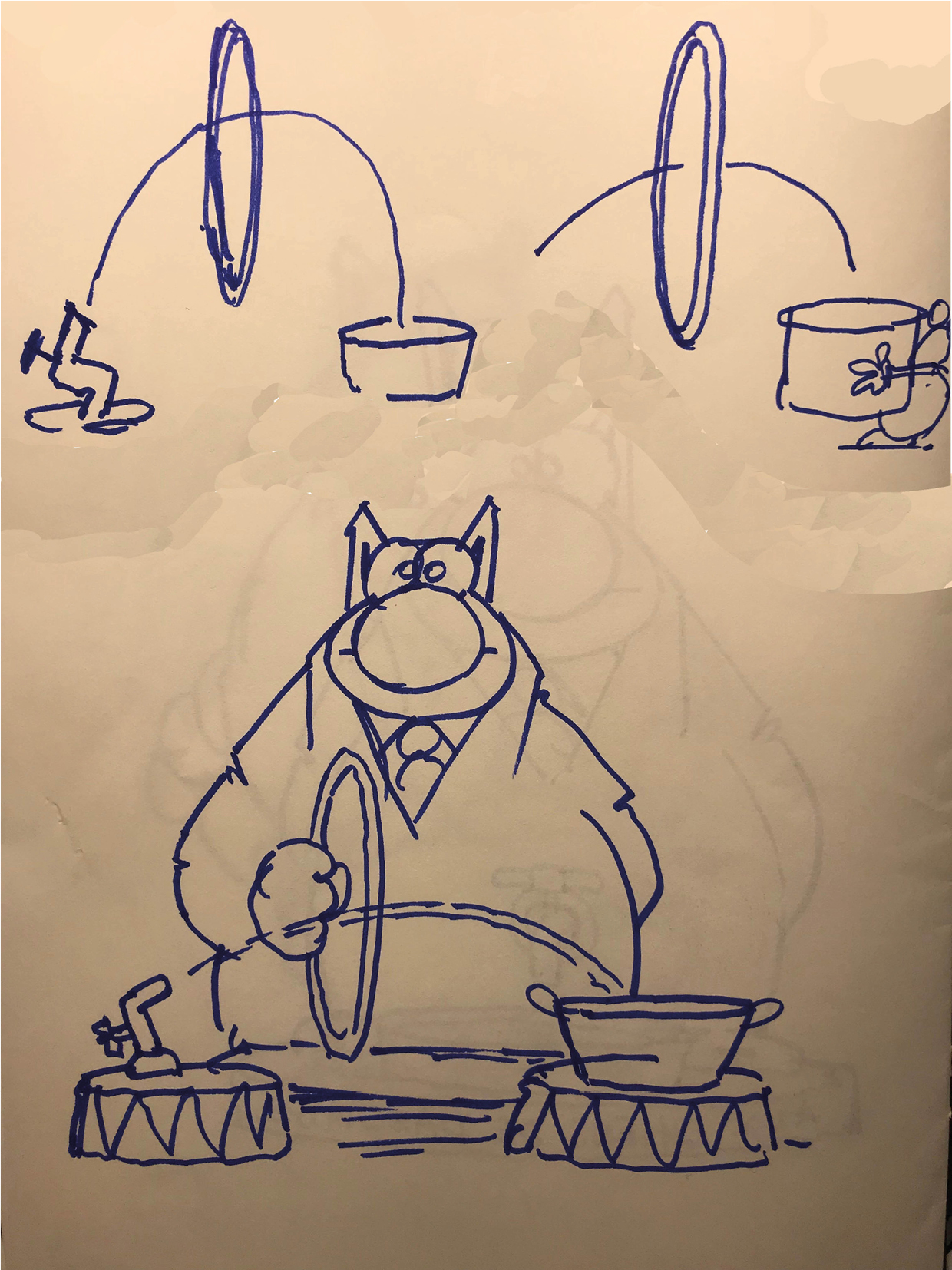 I had the idea of crushing a car with a huge bronze Cat while I was in the office of the director of a car dealership (who wanted to buy one of the huge statues). The man and his wife couldn’t stop laughing, and he finally chose another statue to put in his garden. 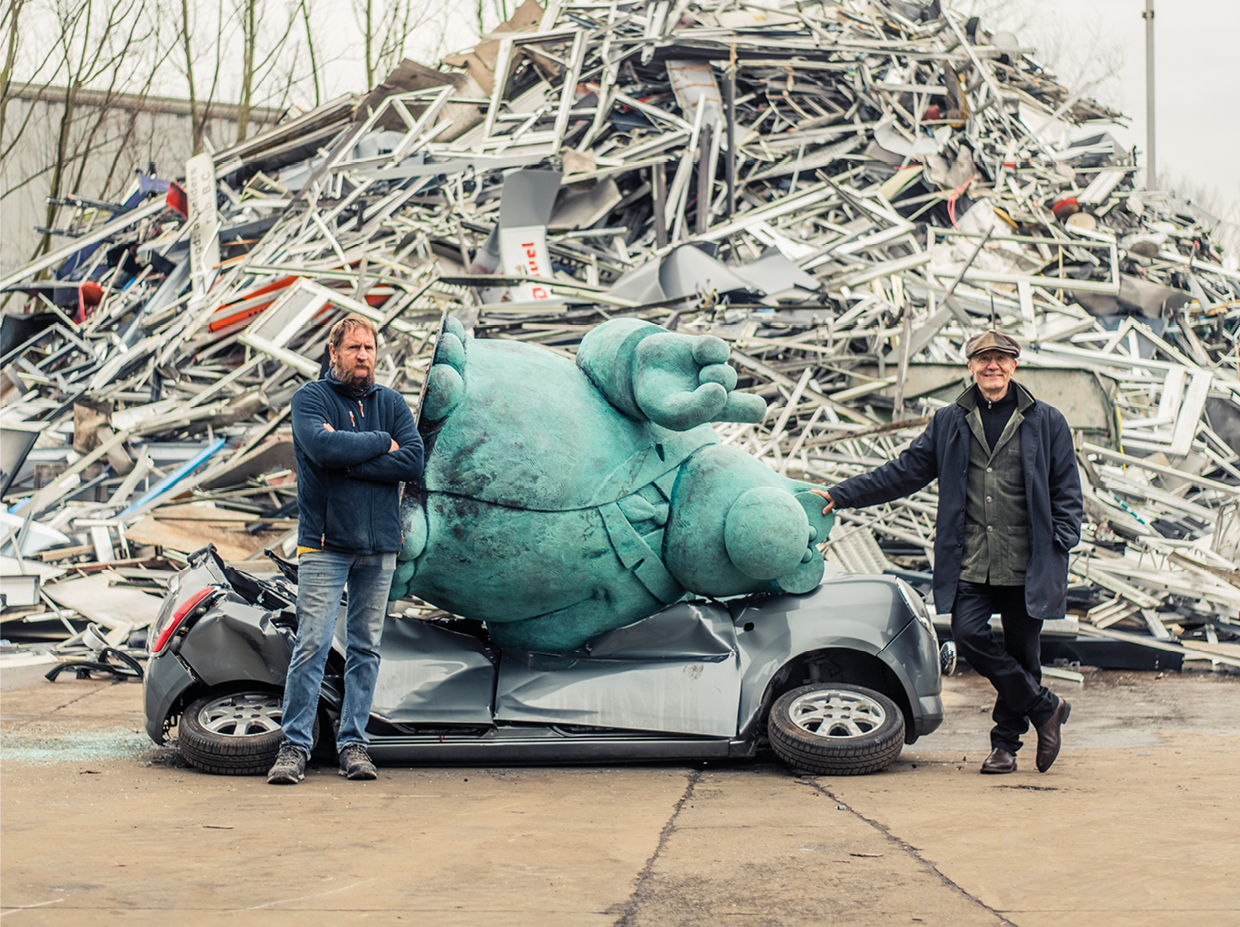 I shall remember the ‘squashing’ session for the rest of my life. We first thought of actually dropping the sculpture onto the car from a crane, 10 metres up, but it was too risky. The statue might have broken, and/or the car might not have been flattened. 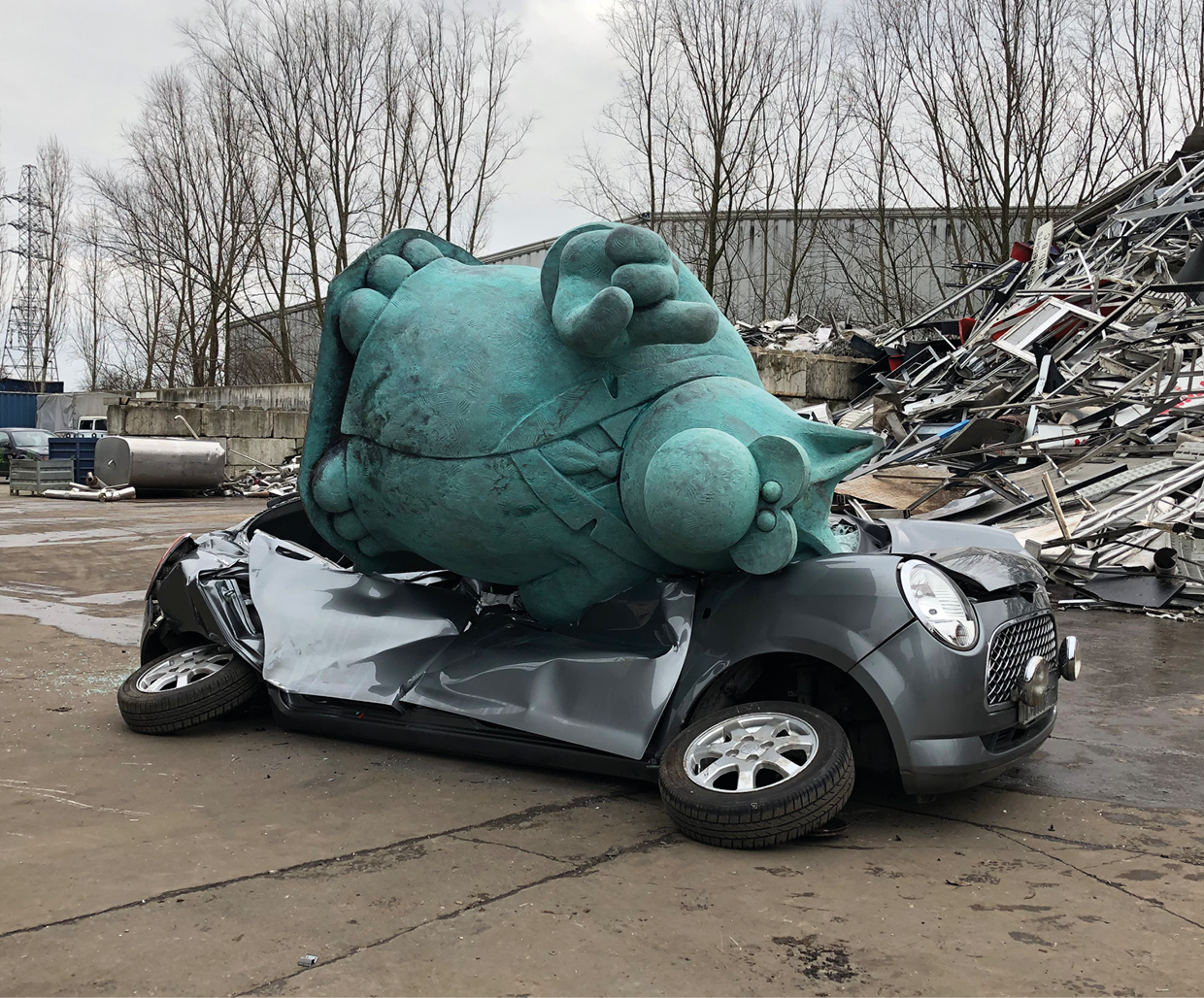 But the claw crane did the job in a fraction of a second. The most complicated part was afterwards, to bend and grind parts of the car to make the ‘cradle’ in which Le Bronze Cat would lie. 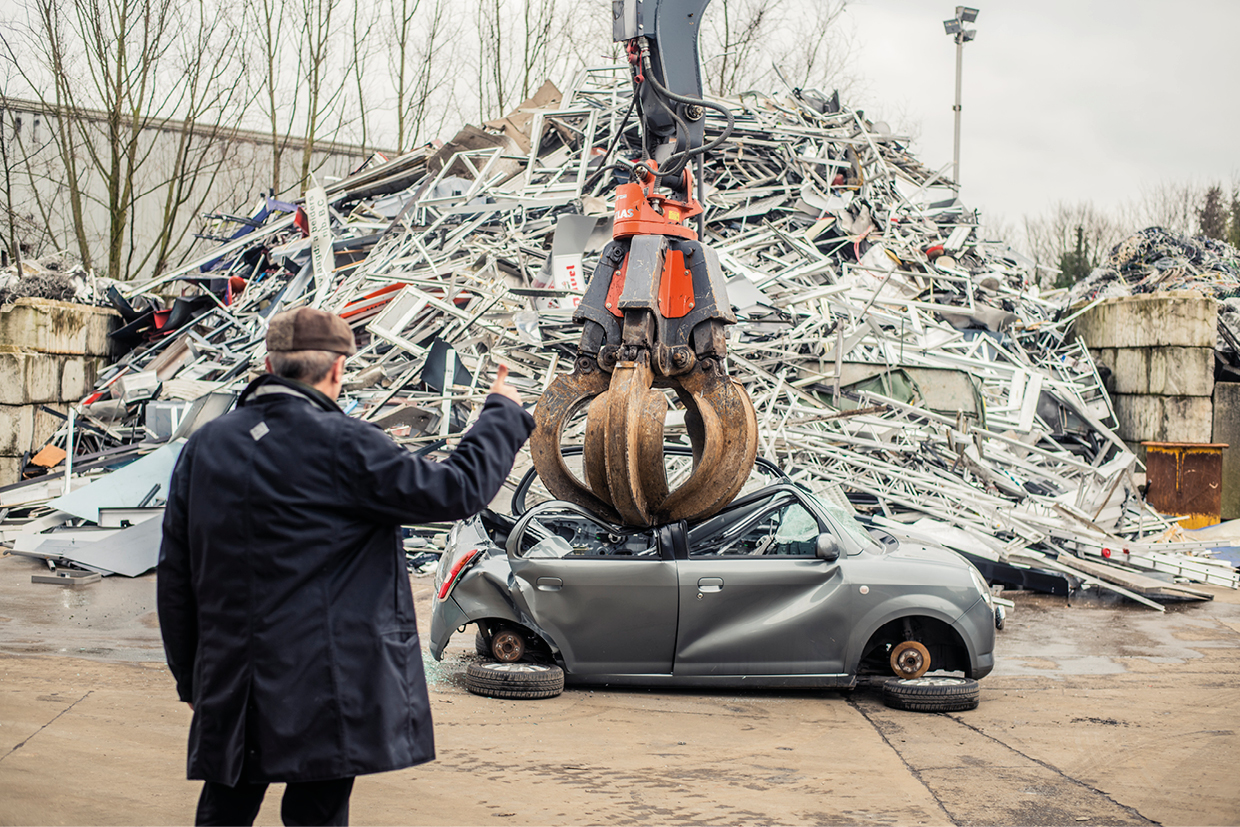 It’s in situations like this that you realise how lucky you are to work with people like Thiry and Jo, because when it was finished, you really have the impression that Le Cat has fallen on the car.

How do show the pollution that plastic creates unless you use plastic? It’s a bit of a paradox, but it works. We originally thought of filling the sphere carried by the Atlas-Cat with bottles of mineral water, fizzy drinks, and a bunch of the other cans and plastic containers. We would need a thousand of these. But after a few trials we realised that it would be ugly, unhygienic and not very attractive. 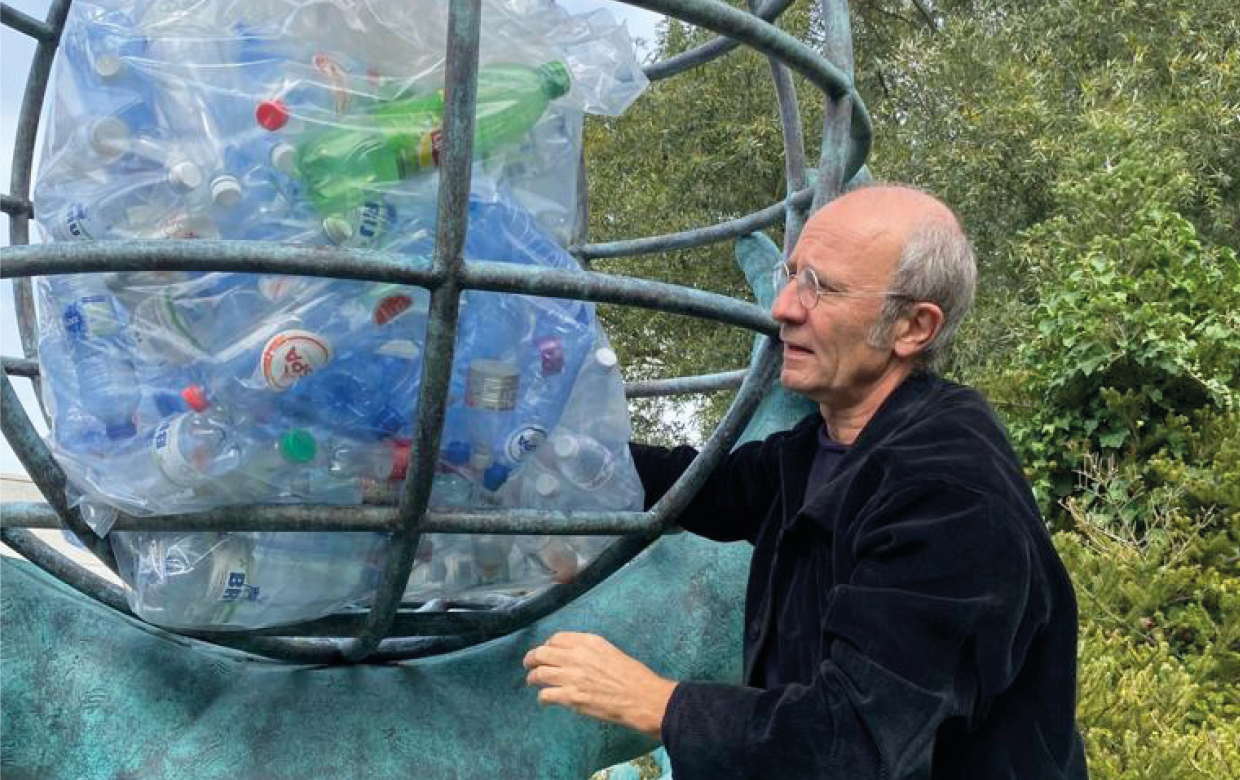 Then we thought of looking for inverted sponsoring – we’d contact certain makes and say “If you don’t donate this much money, we’ll use your very recognisable bottles and it’ll be a heap of serious negative publicity for you”. But this looked a bit like blackmail, so we dropped it, not very proud of ourselves. 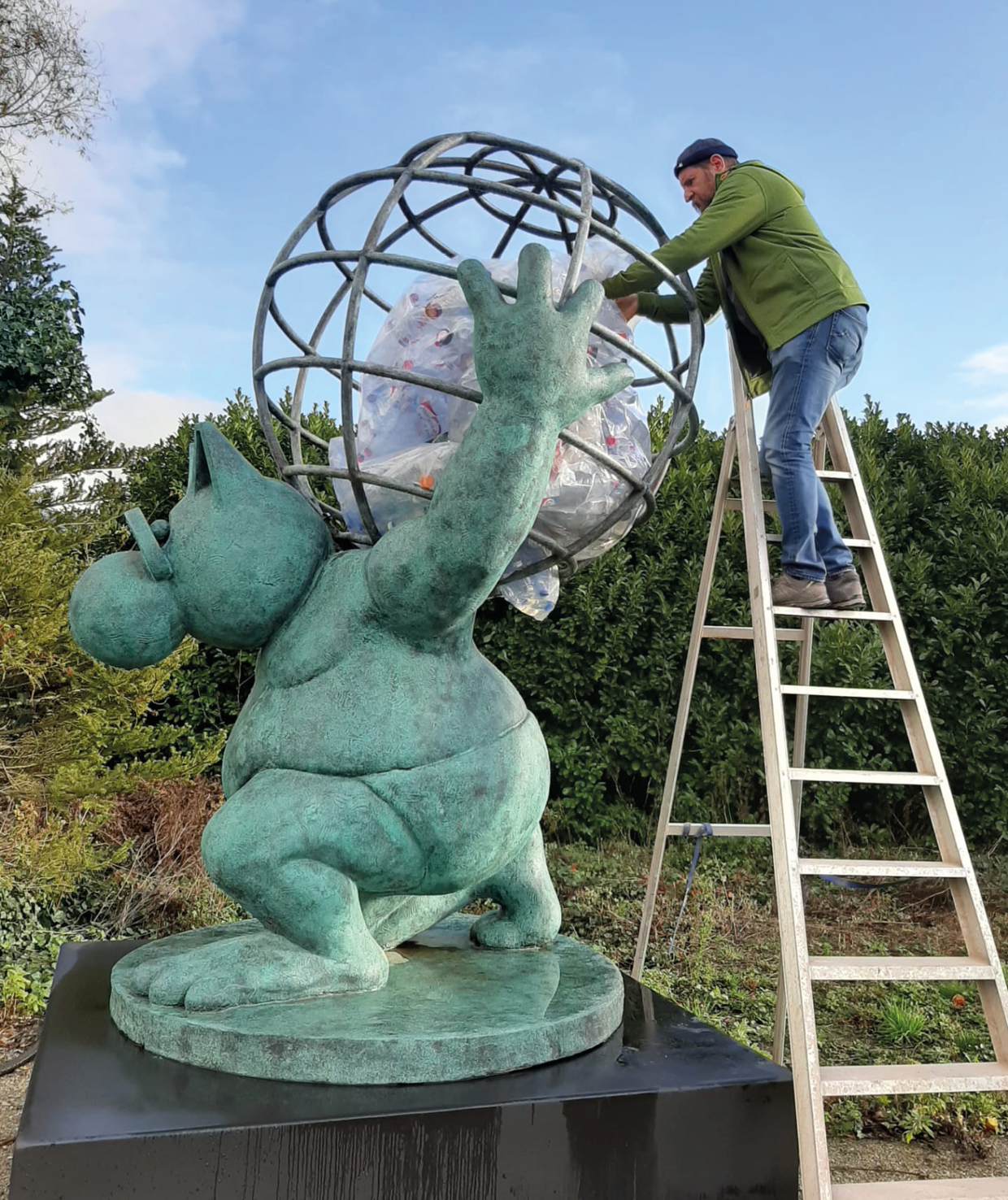 Finally, we ordered 1,000 new empty plastic bottles, with no name on them. I’m sorry we had to produce such a load of plastic, but our aim was to expose the excessive use of plastic in the world. 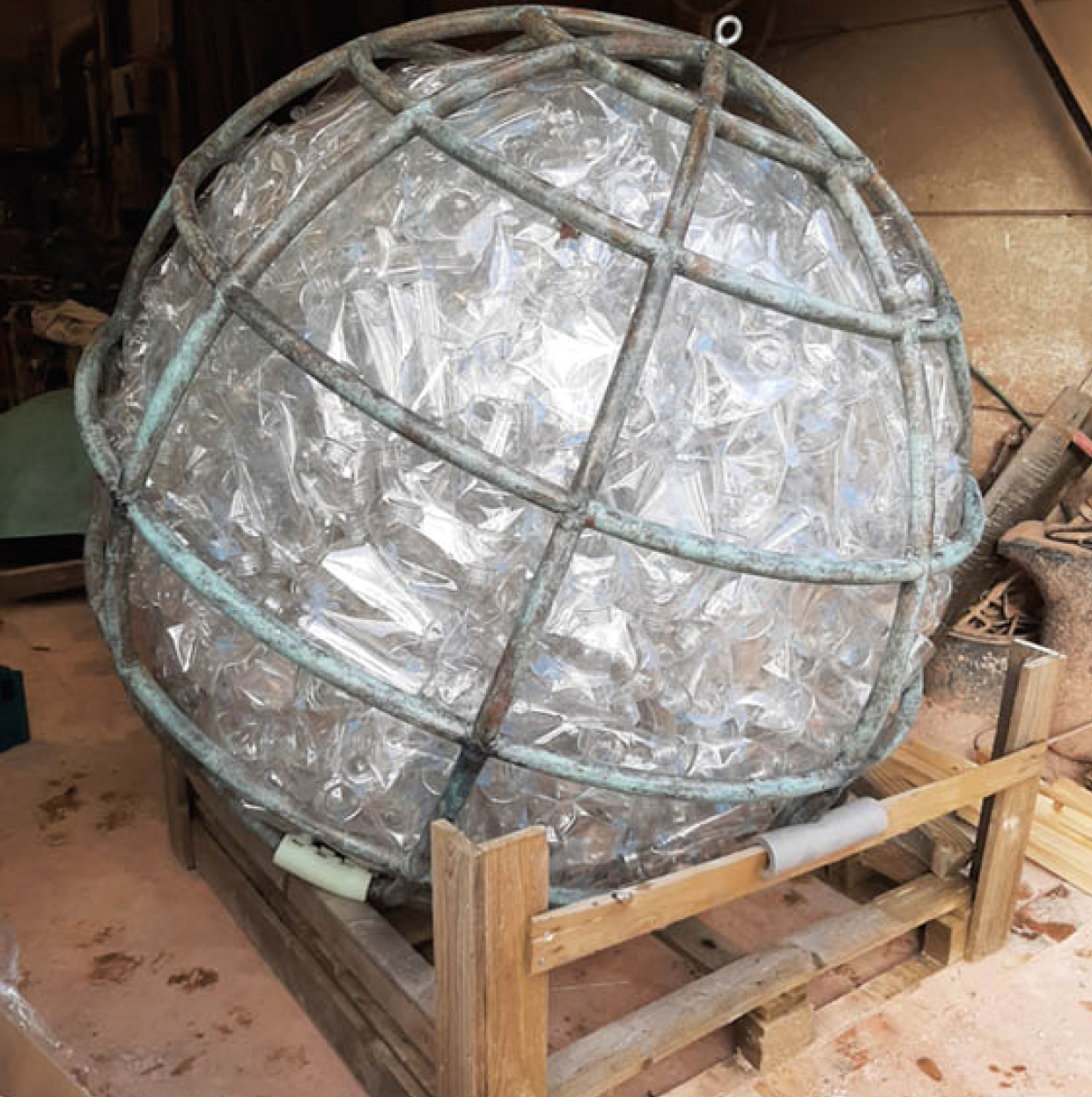 I promised I would tell you why ‘Like a Mouse on the Wire’ (the mouse who is tightrope-walking on a rope held in the air by Le Cat) is so big. As I explained in Stage 7, we send the 3D scan to the milling company. Now, what happened was that for this one we got the measurements wrong. We usually ask for there to be 2 metres from the tip of the ears to the soles of the feet. But we didn’t think that for this one the arms and hands of the feline would be above his ears. 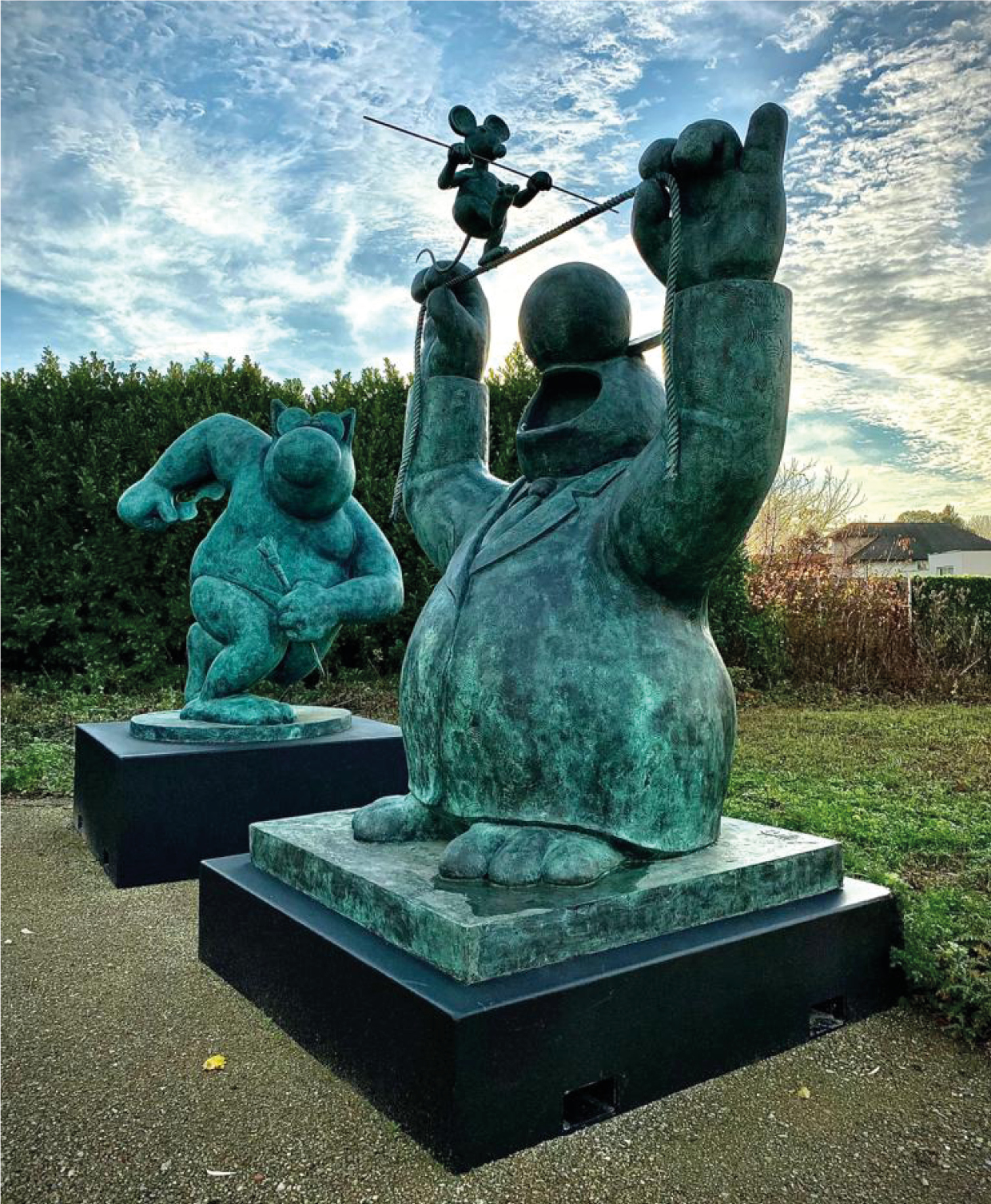 When François Deboucq got the polystyrene model, he called me, panicking a bit, and said that we’d have to mill another one with the right height. I jumped in the car and rushed to his workshop. And yes, it was very big. But it looked great! We calculated that if we put it on a base 40cm high (instead of 70cm) and transported it on a low-loader truck trailer, we’d get it under all the motorway bridges. Whew!! So we kept it as it was … it was just too fabulous!

When you exhibit in a public place, the number of technical constraints is incredible, particularly the safety measures. I told you about the fountains and water (16) and the weight of the statues (15), but I haven’t yet talked about the wind.

When a storm hits a town, it can cause a lot of damage and we have to be prepared for this sort of problem.

The Paris Prefecture requires the material exhibited to be able to resist winds up to 160 km/h (100 mph). These are obviously not common, but they who can do more, can also do less – as they say – so we did. Our sculptures, their bases and our info-points would not be blown over by 160km/h winds … this was verified and certified by Veritas, a company specialising in these things. In a 160km/h wind, Le Cat would probably see a whole load of things flying by him, but he would not budge … . 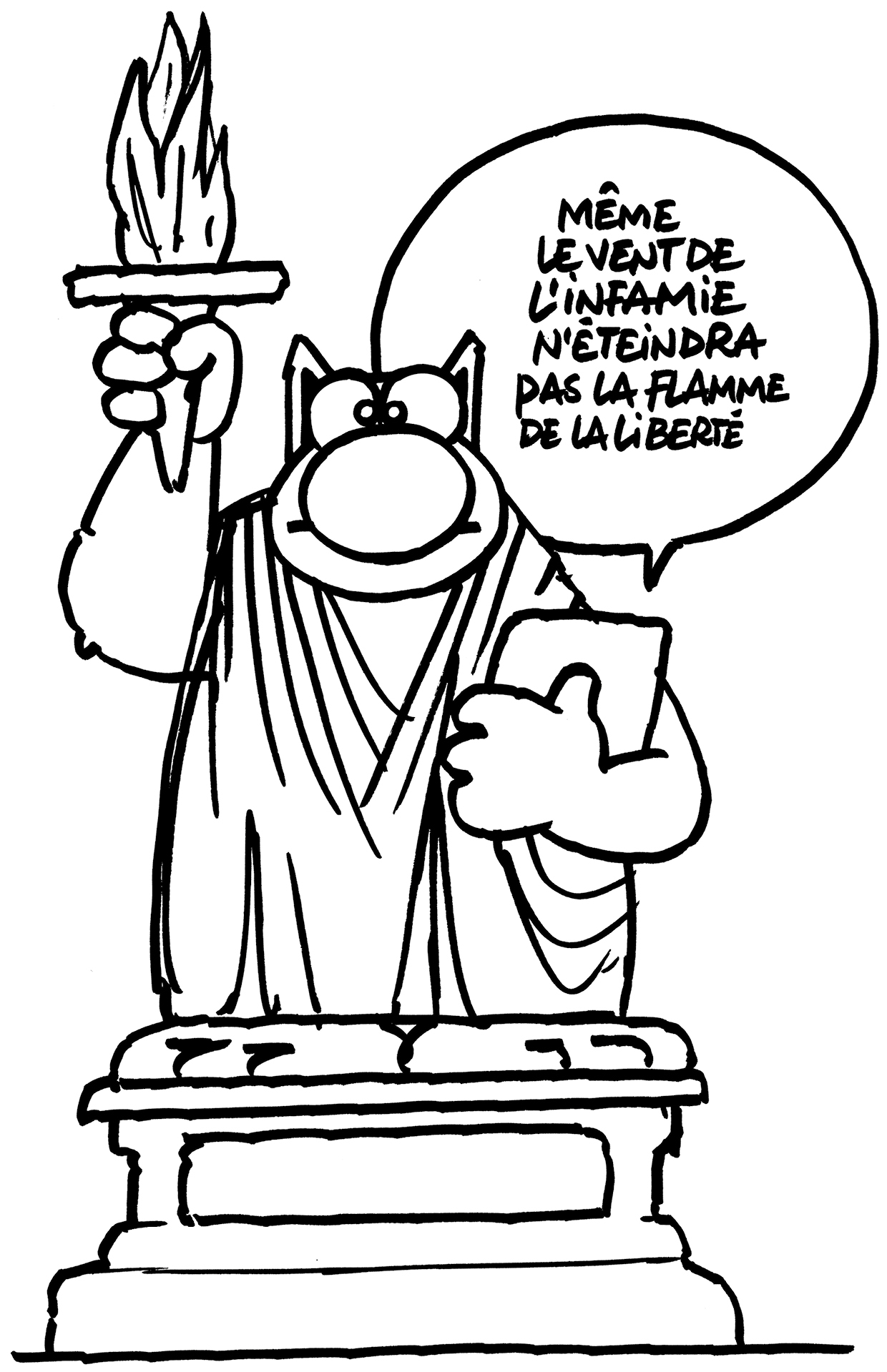