The clay sculpture is finished. François Deboucq and I have worked regularly on the fine details, and then the final texture (notably by making a sort of wooden comb which we use to put ‘light scratches’ on the smooth clay). 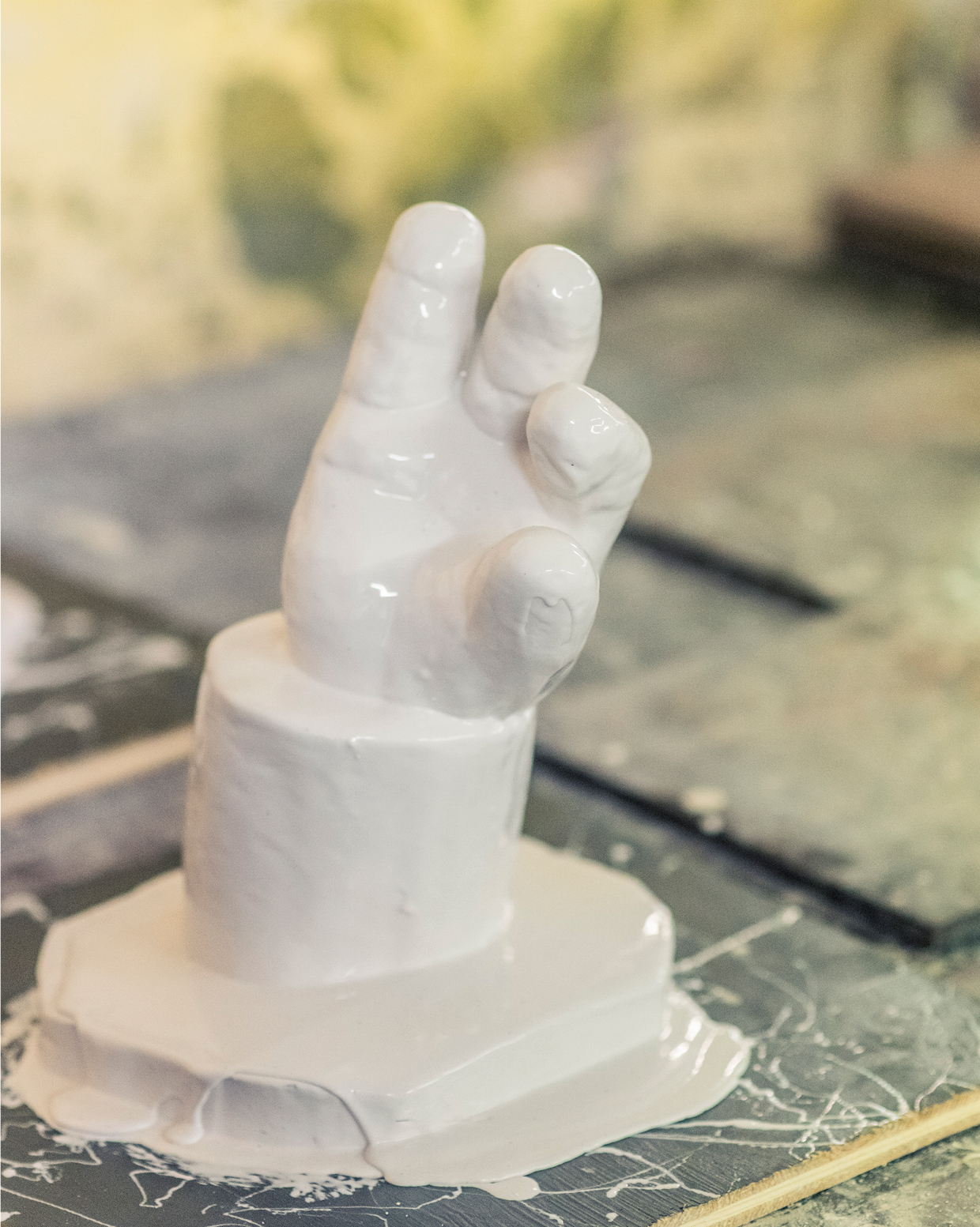 When we’re both satisfied with our work, we begin the moulding operation. This involves covering the whole model with thin successive coats of liquid silicone until the whole mould is covered in a 1cm thick layer. 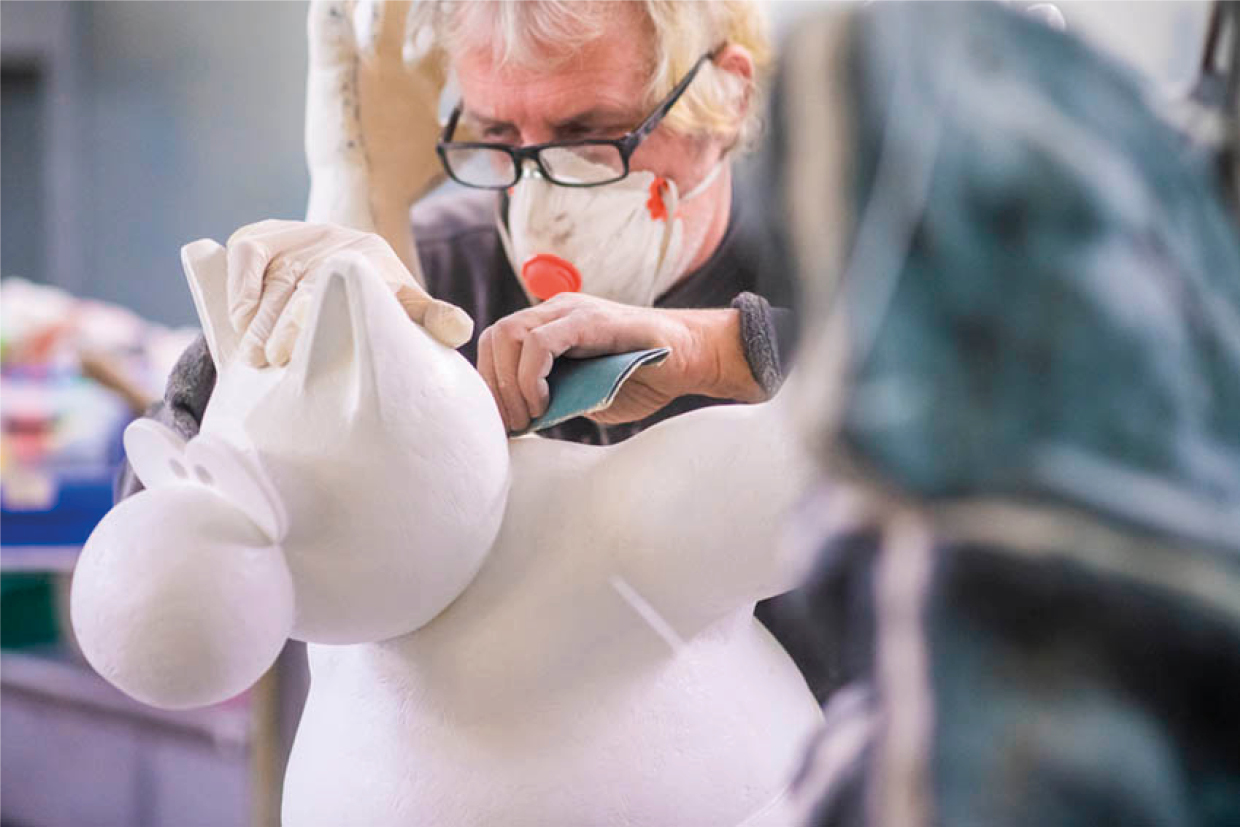 The mould is then covered in a rigid polyester shell, then cut up into several parts. From this ‘negative’ model, François and the others make a first polyester Cat, which from now on will be the reference model, because the original clay model will dry and break. 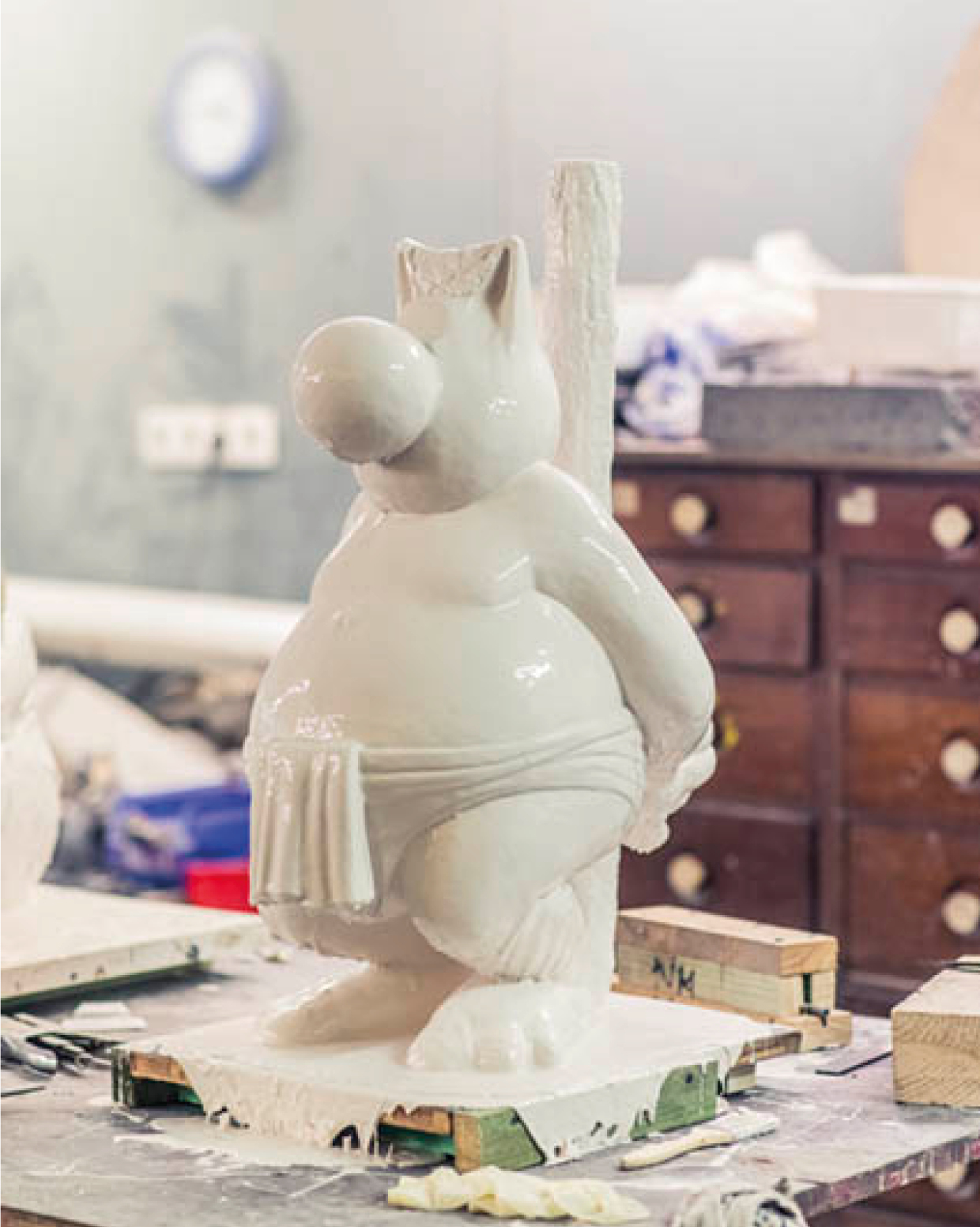 We send the reference model to a company which scans it in 3D, right down to the finest details. This high definition file is then given to another team which mills the sculpture to its final size out of a huge block of polystyrene (the tips of the ears are 2 metres from the ground). 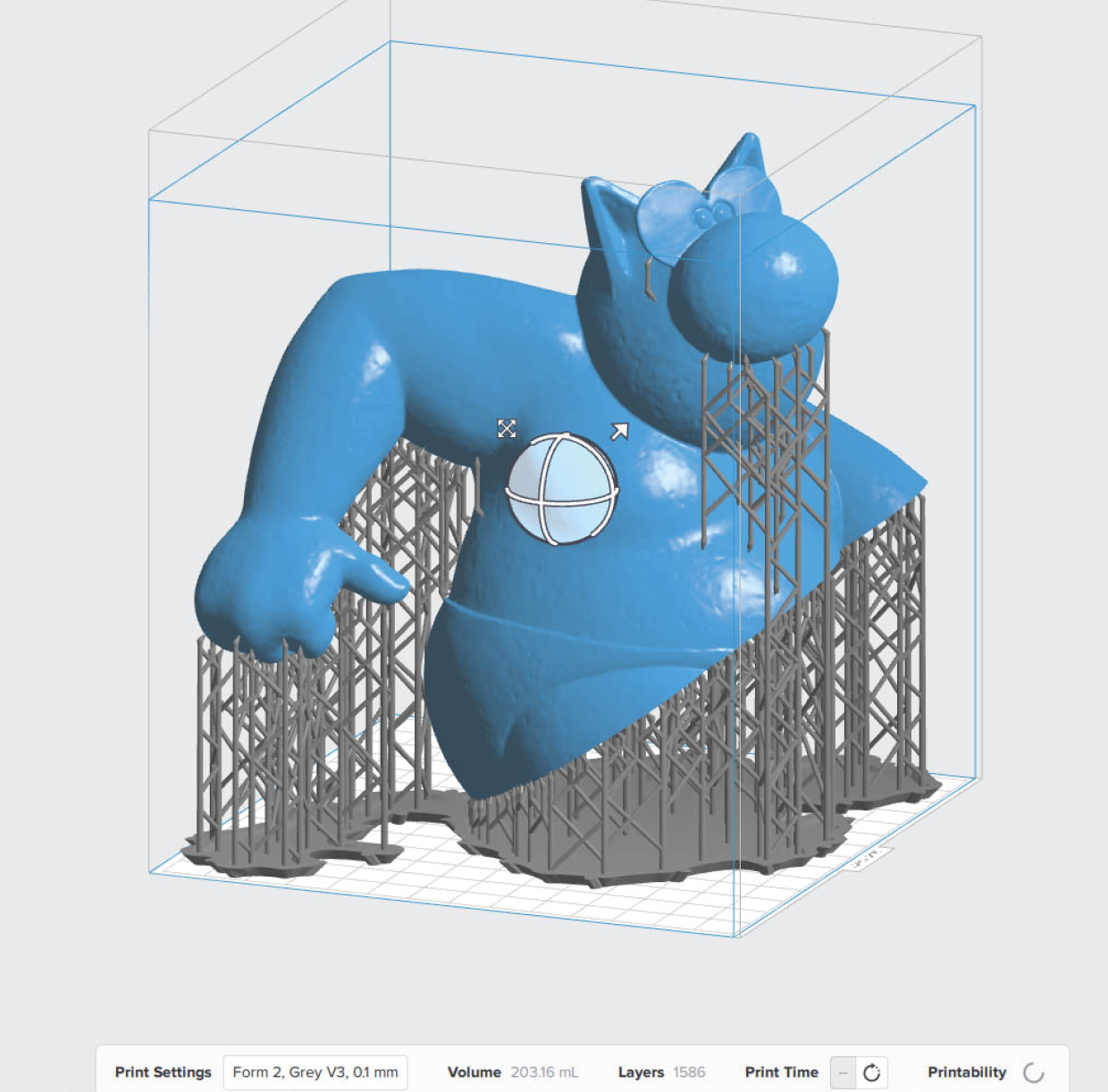 Formerly, these changes of scale were done ‘by hand’, by highly skilled craftsmen who translated the measurements from one sculpture to another by calculating the enlargements and contractions of the piece. 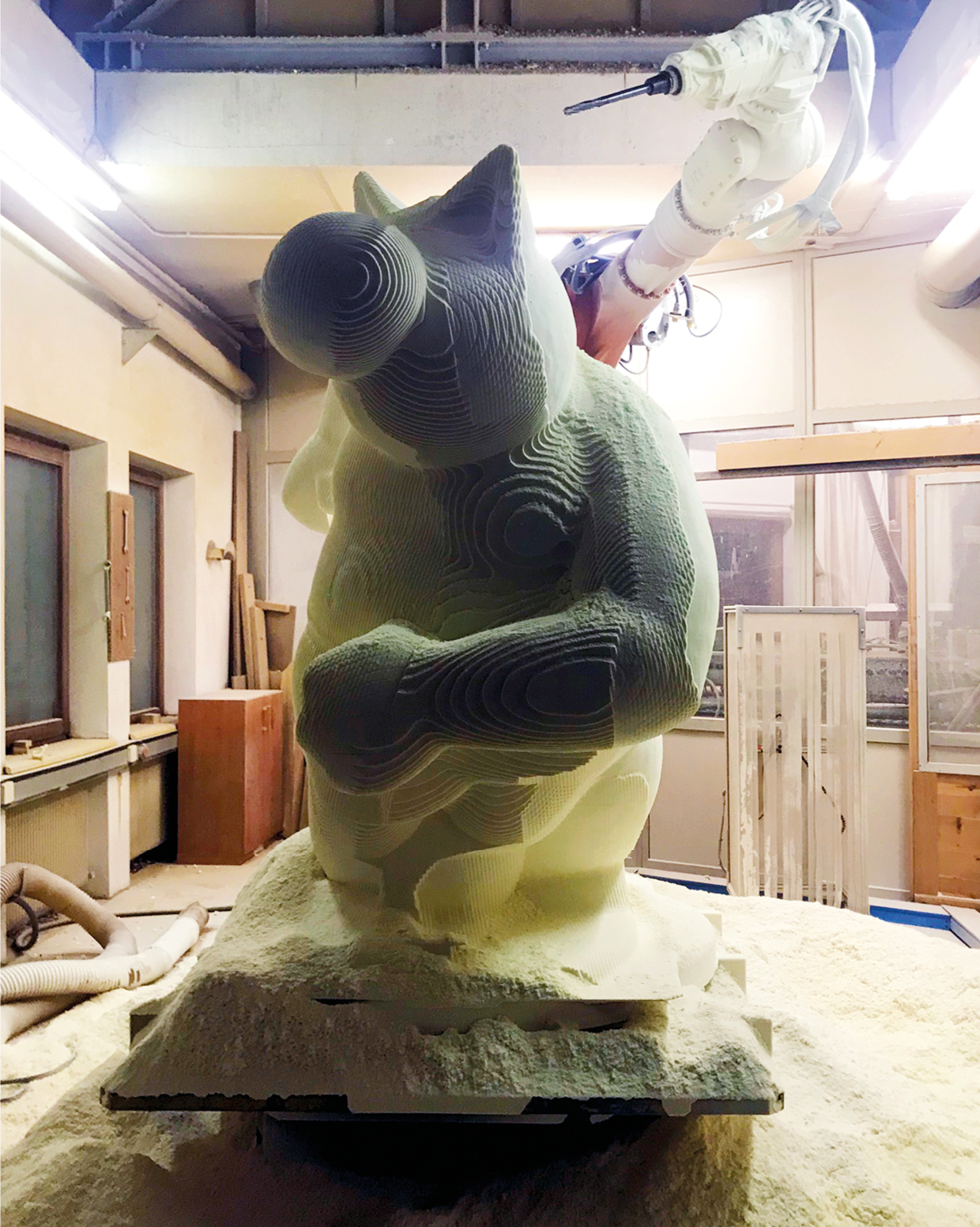 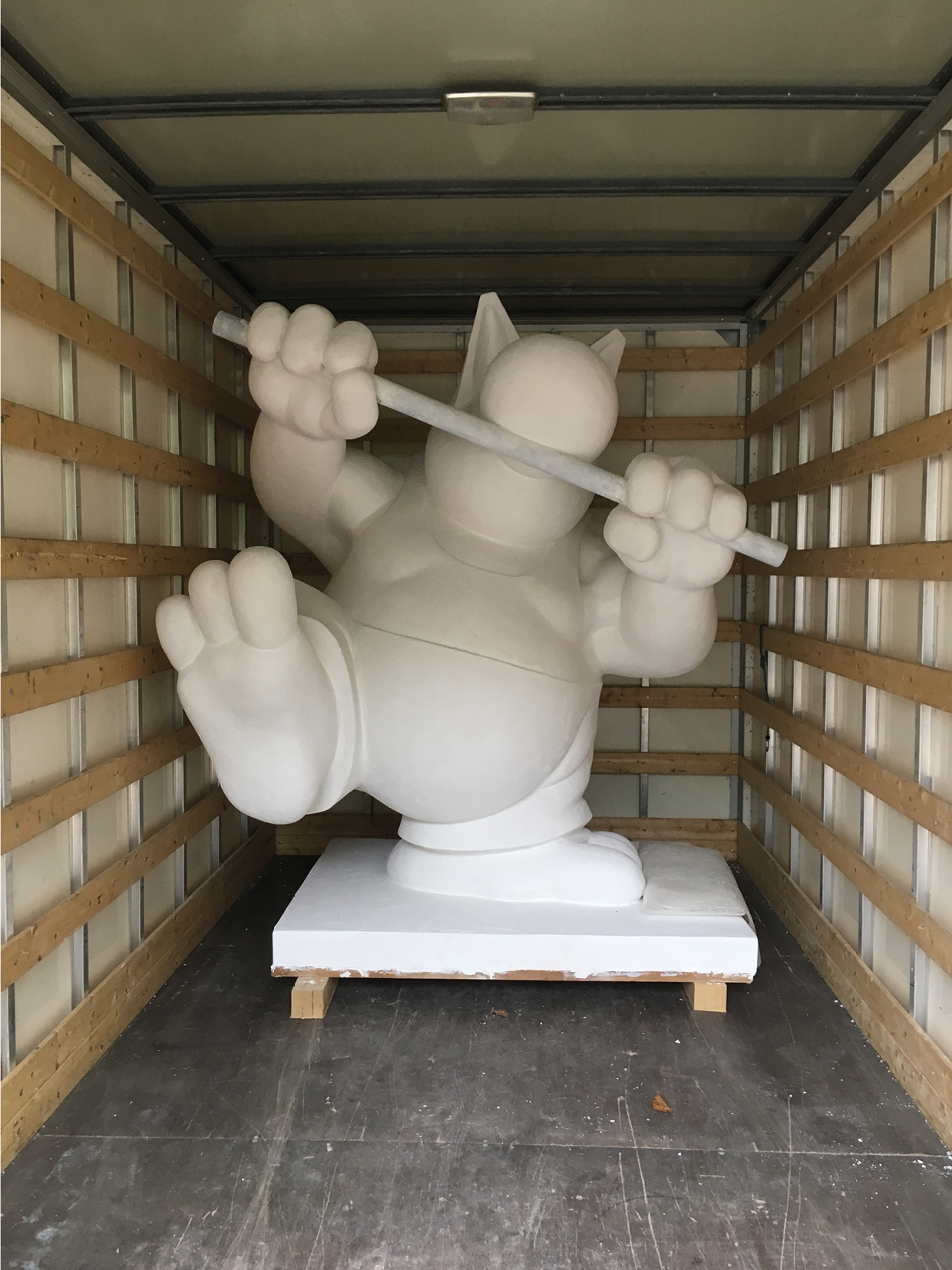 Le Cat doesn’t stay ‘lightweight’ for long! We have to give a texture to this huge statue and use a filler to correct any errors which may have crept in during the milling. 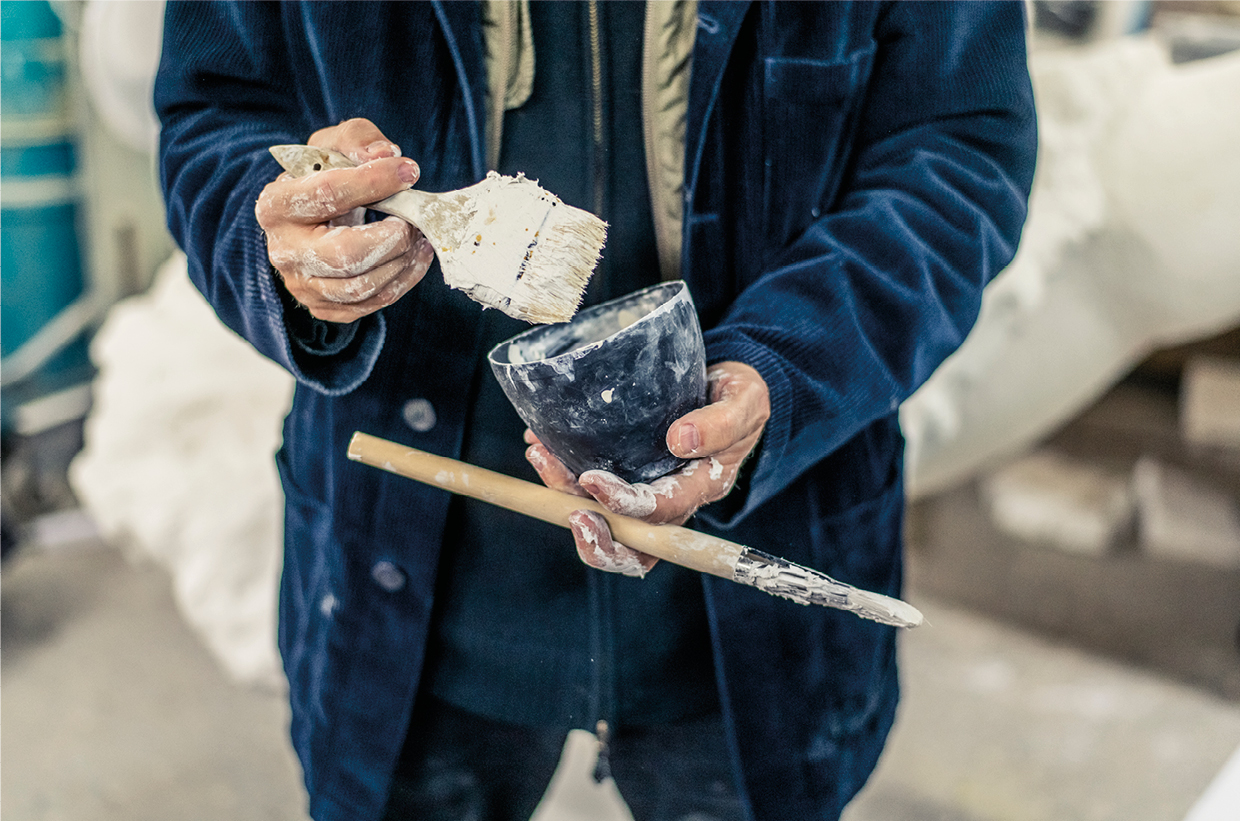 This is one of the last stages when I can intervene directly because after this, Le Cat will go to the foundry and their team. 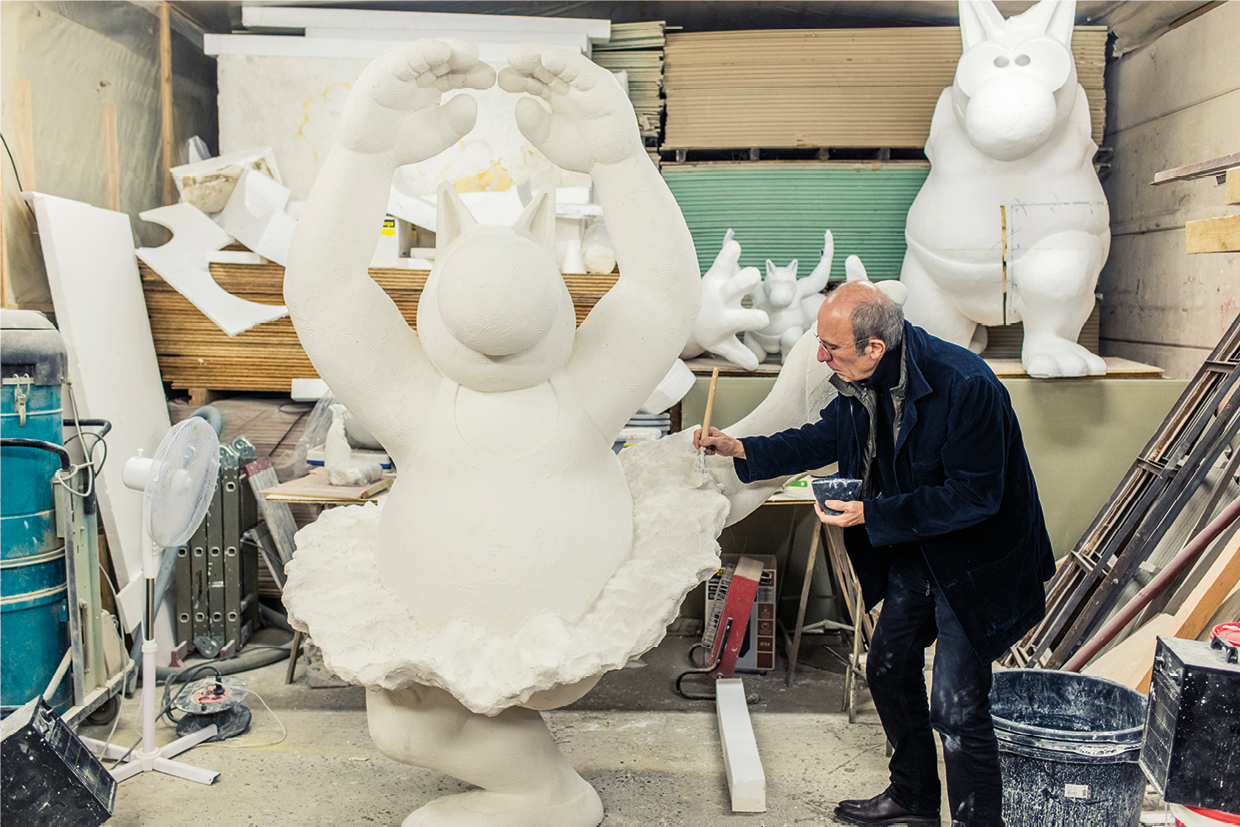 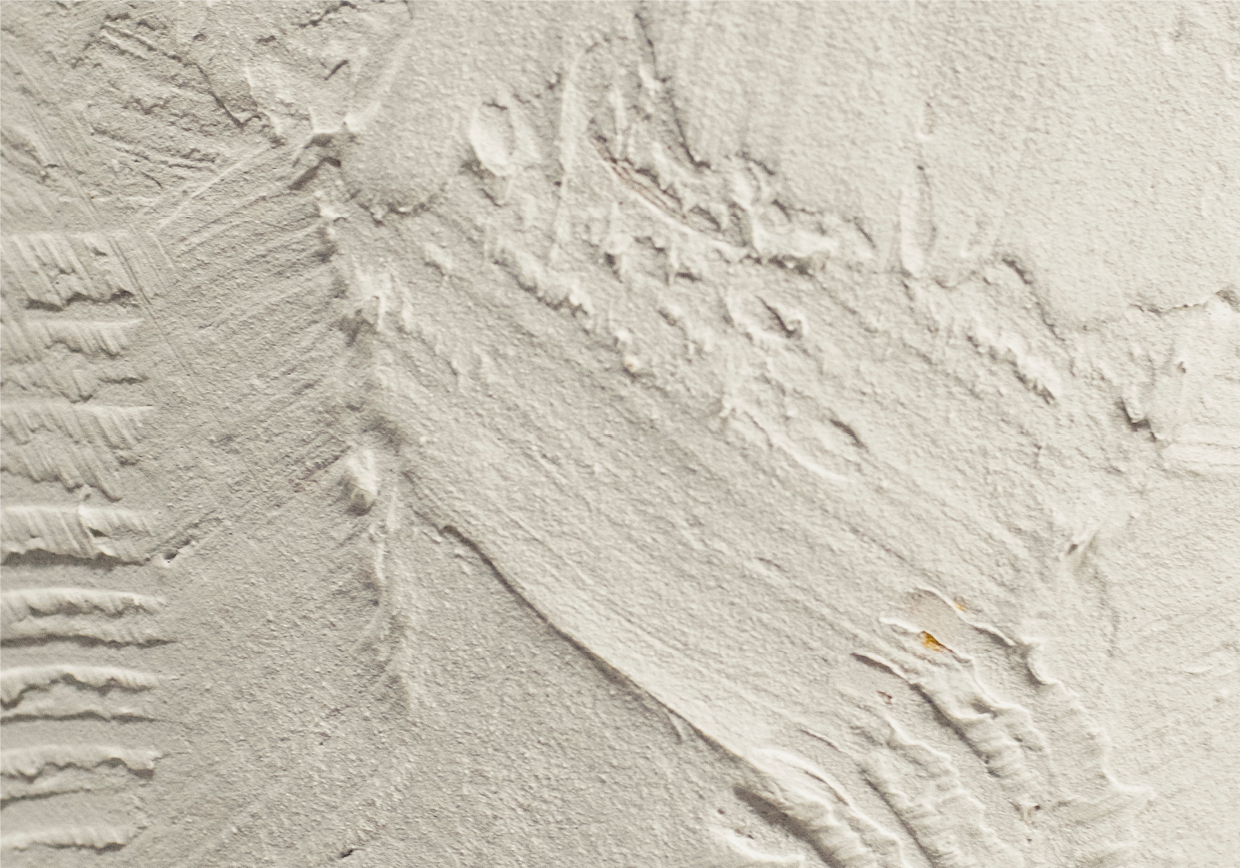 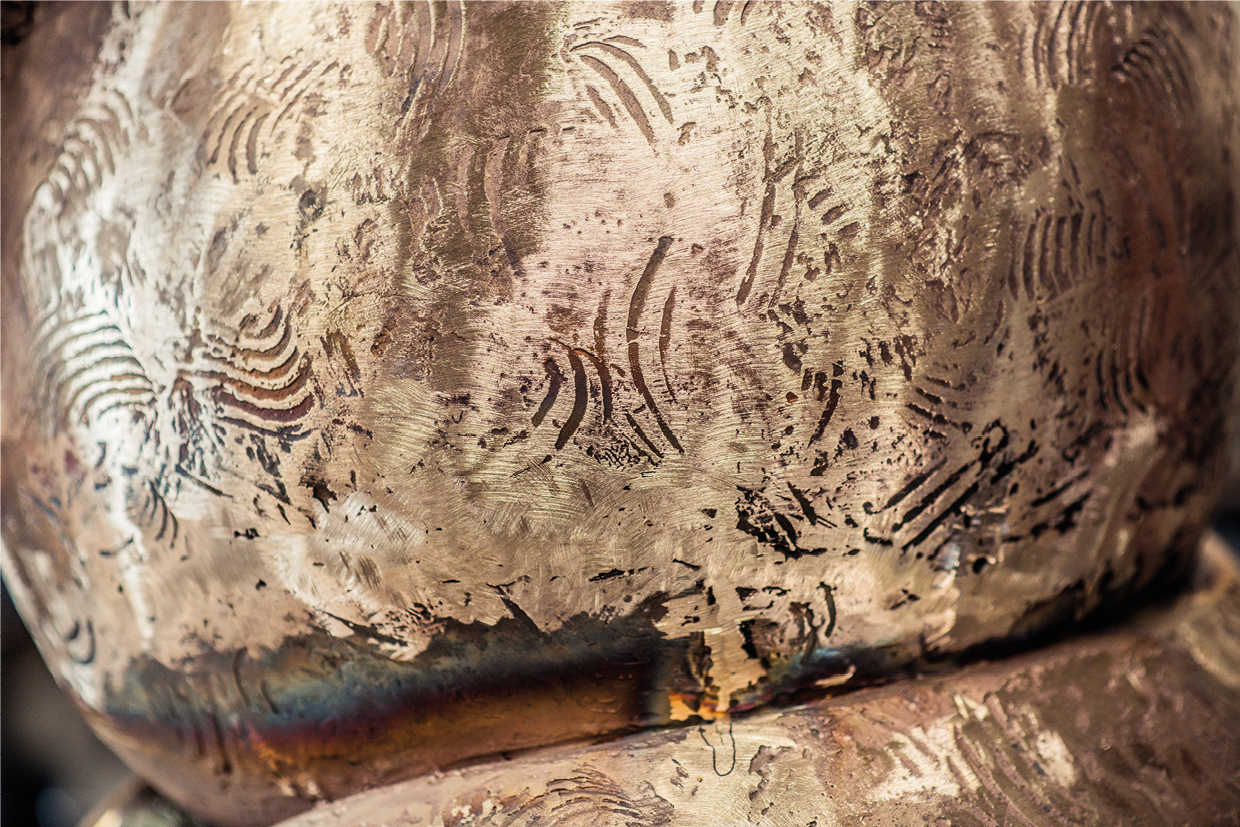 STAGE 9:
The mould and lost wax 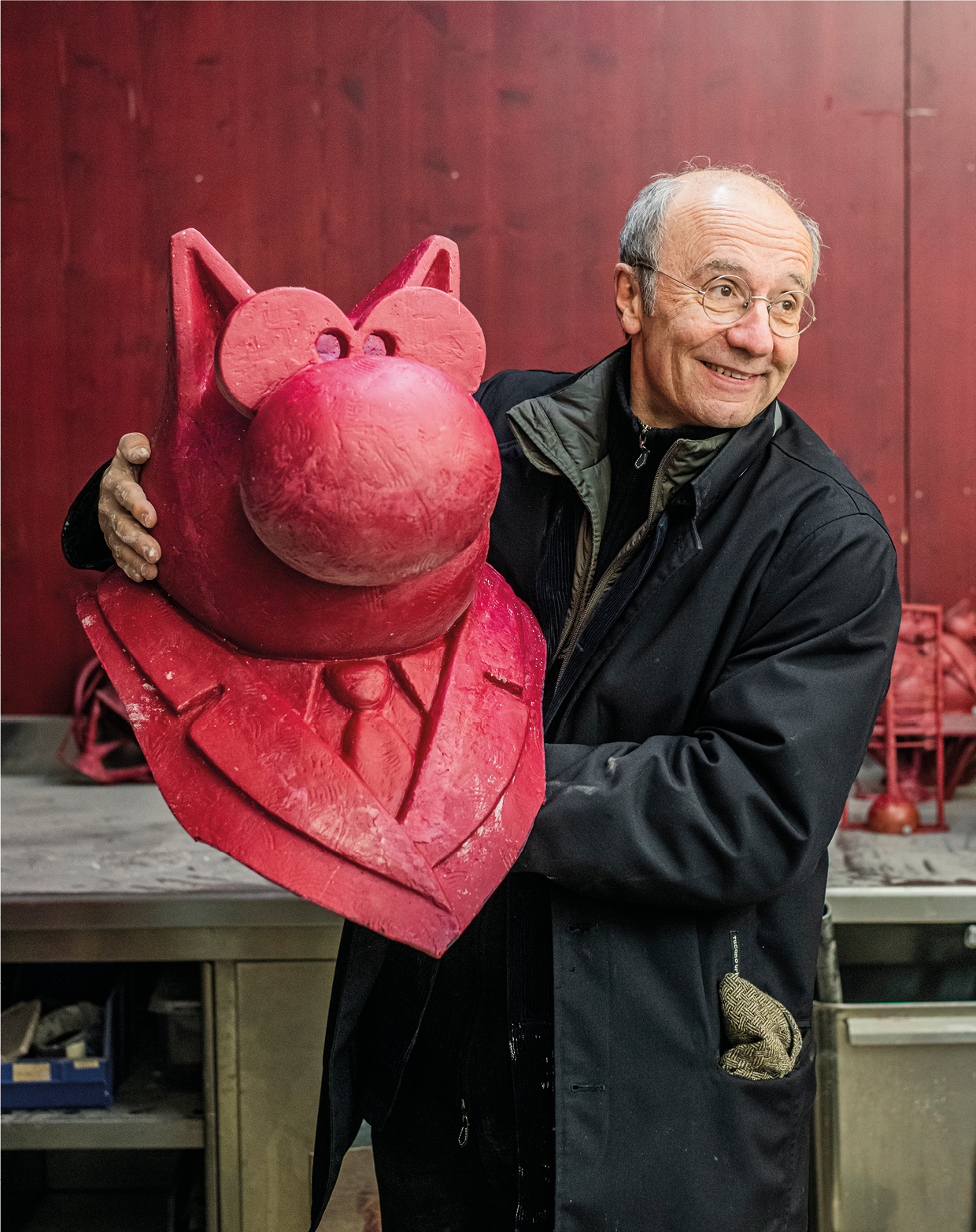 All the different sizes of Le Cat are made using the lost wax process. The only difference between the Mini-Cats (20 cm) and the 2-metre versions is that the big ones have to be made in 10 pieces. 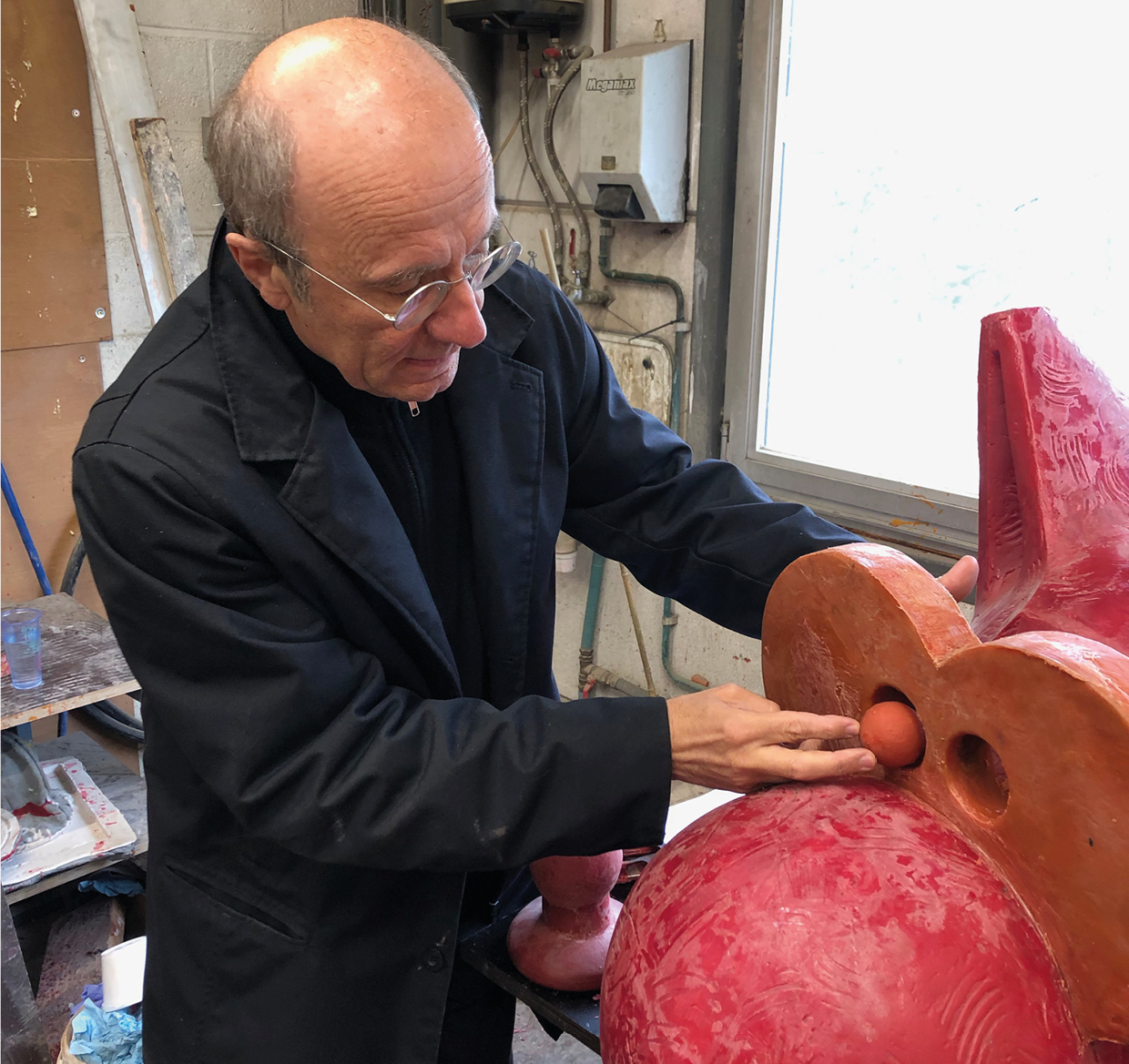 Jo Van Geert and his team make a silicone mould out of the huge polystyrene Cat (just like in the moulding of the original model), but this time in several parts. 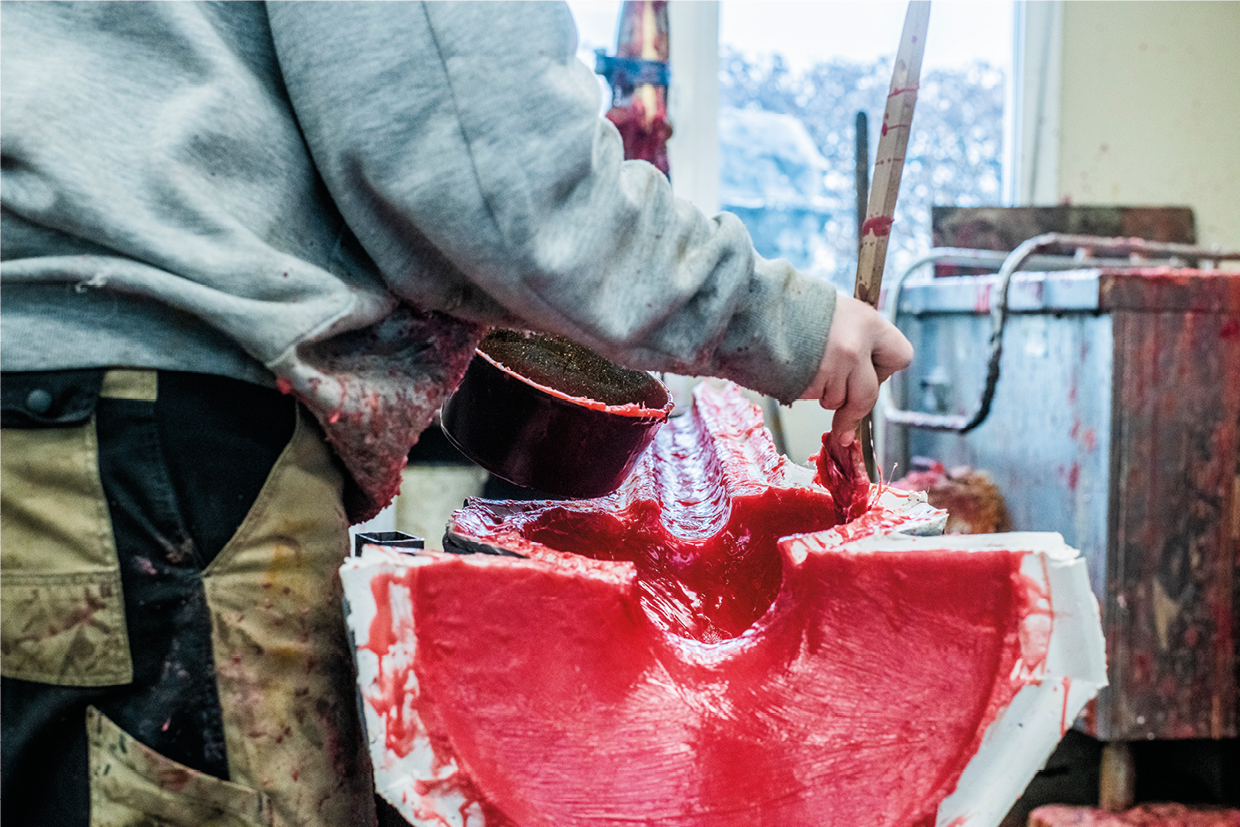 They cover the inside of the 10 moulds with liquid silicone wax, using a paintbrush. They apply successive thin layers in order to reach a thickness of 4 to 5 millimetres. When they become hard, all the parts are assembled to make an exact copy of the polystyrene model, but this time in wax. 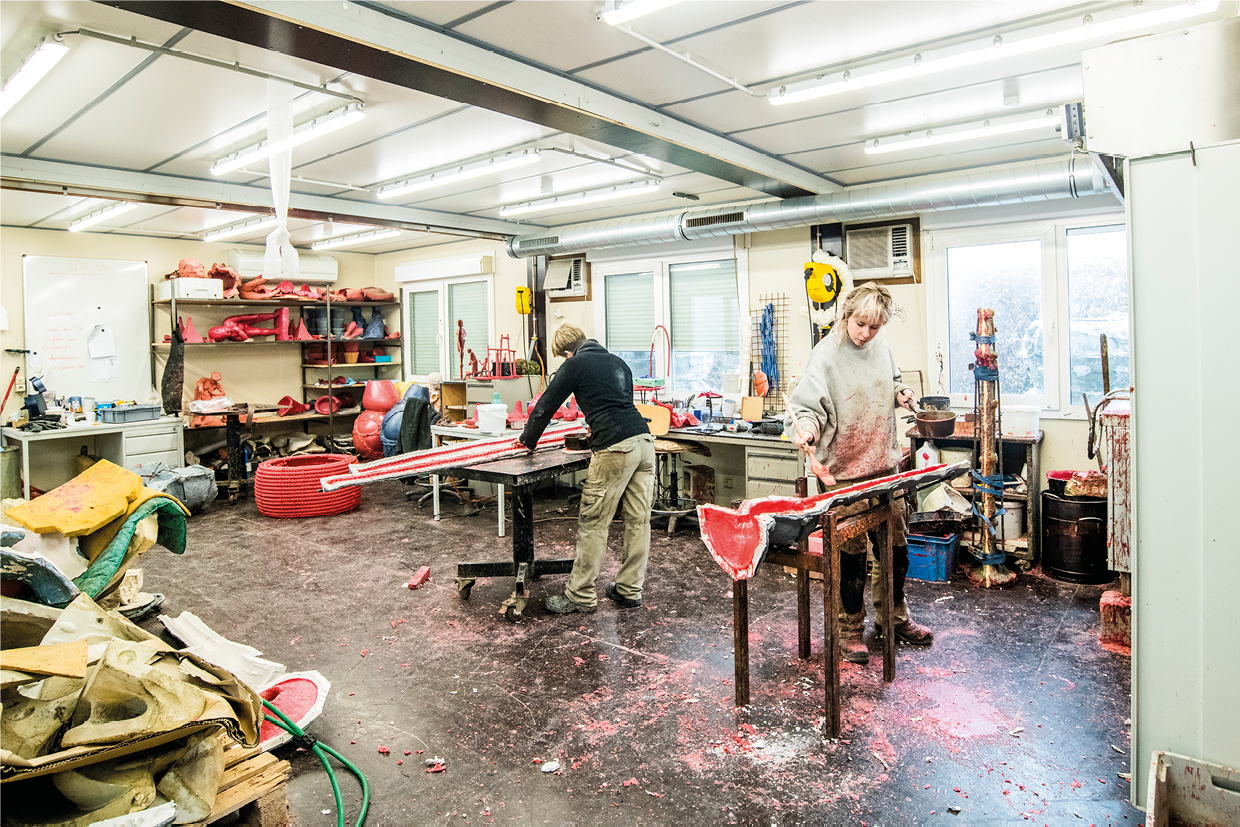 This copy of the sculpture in red wax is important because it enables us to check that all the parts of the mould fit together perfectly. When Le Cat is completed, he will be cut into several pieces, and then we go on to Stage 10 … . 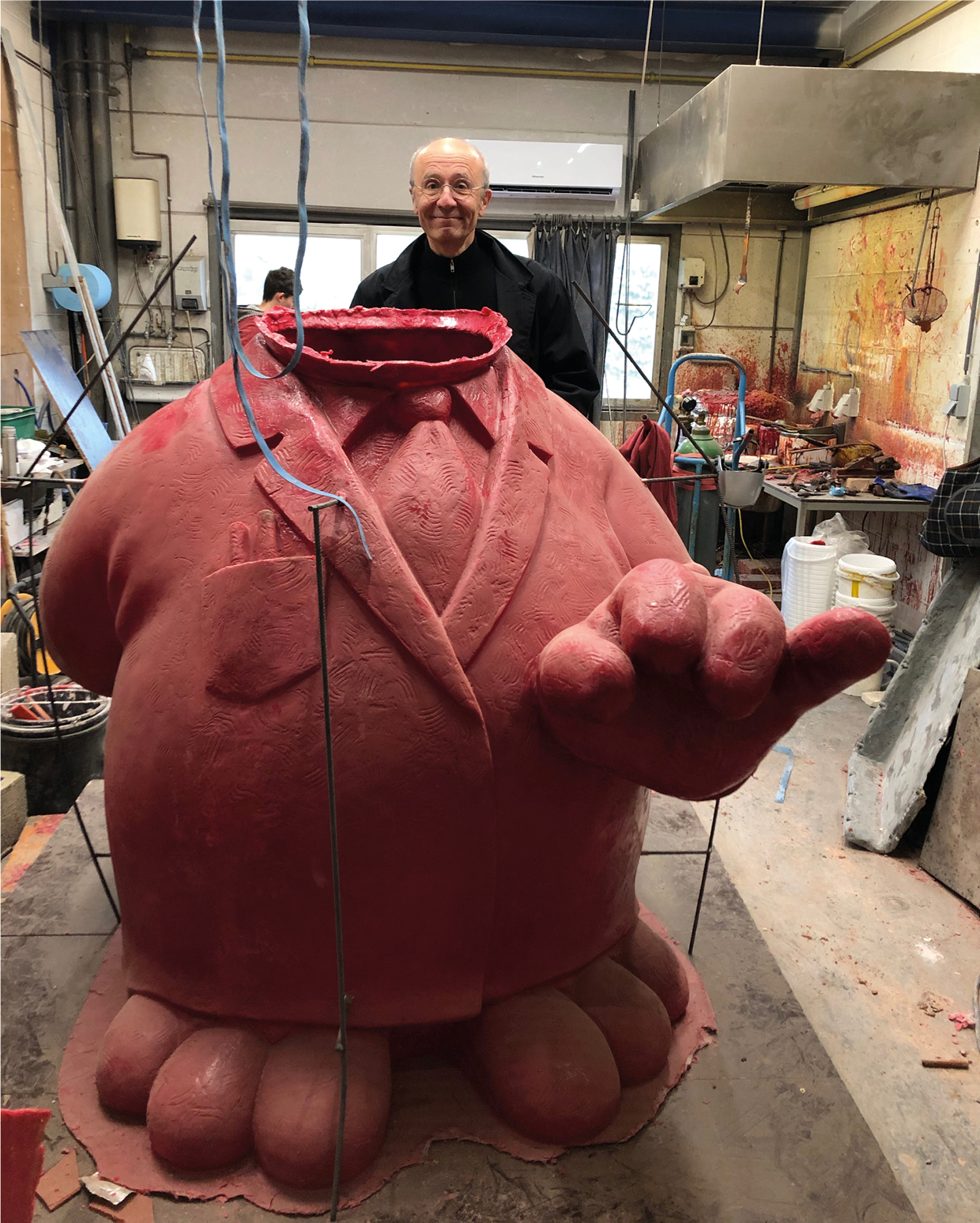 STAGE 10:
The sarcophagus and the oven

Each piece is now put into a ‘sarcophagus’ made of heat-resistant plaster. The wax must be completely surrounded by this plaster, like being immersed in liquid. 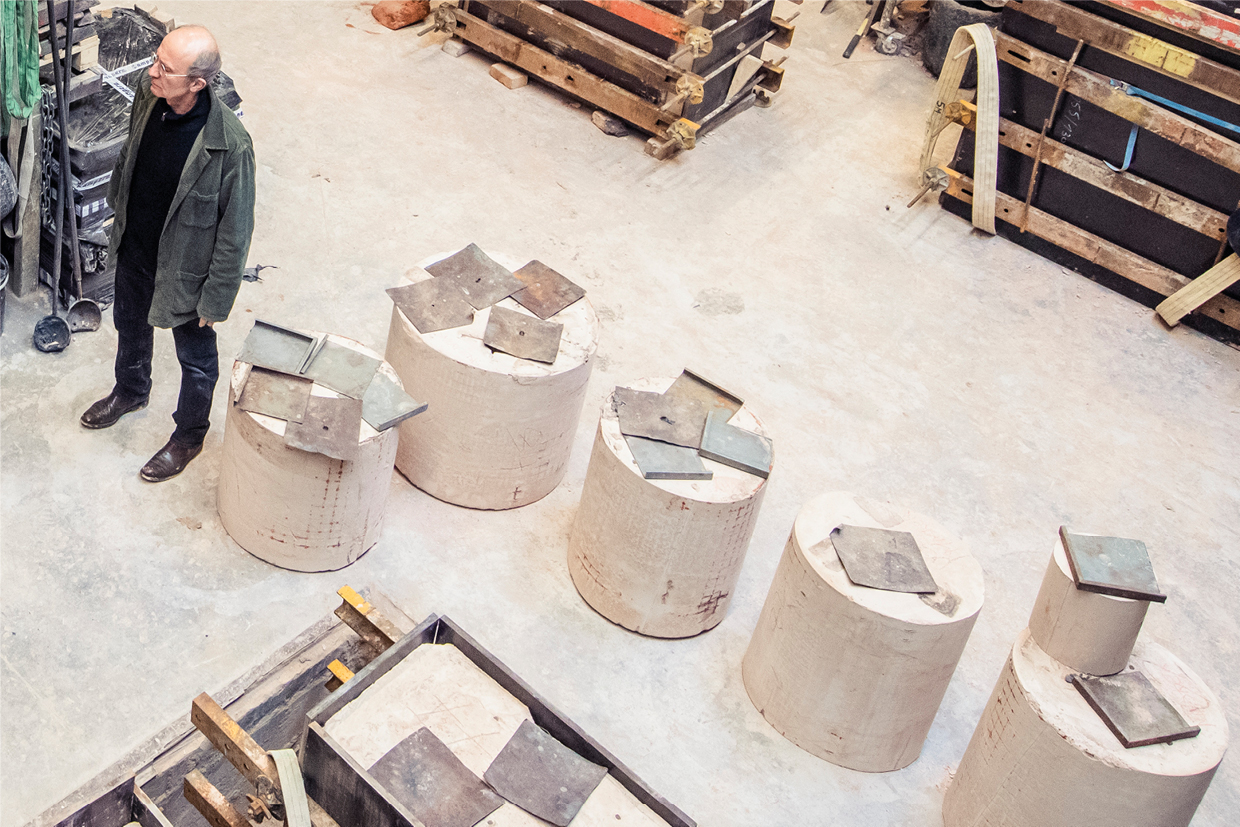 The ‘sarcophagi’ will stay for 2 to 3 weeks in an oven at 600°C. The wax will melt, and the heat-resistant plaster will become as hard as rock. Each sarcophagus now contains the shape of each piece of wax.